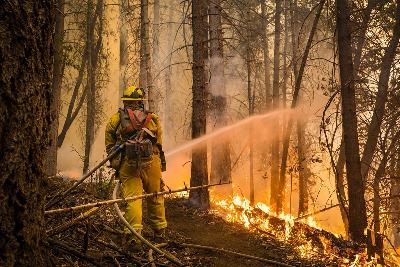 Andy told the Times that, “despite the devastating outcomes, the problem isn’t the fires, but the growing population across once-sparsely inhabited spaces.

“He contends that the fires themselves are not burning more acres than in past drought cycles, but are simply more dangerous to humans. He points out that, historically, about 70% of fires extinguish naturally — just as around 2% become uncontrolled. Those numbers, he said, have remained remarkably stable despite greater fire suppression efforts.”

“The 1930s, which we know from John Steinbeck as ‘the Dust Bowl,’ was just as dry as today, maybe even drier, and we had horrific fires then,” Stahl said. “Entire towns were wiped out, but they had 10 people in them. Now we have Los Angeles in the way.”

While Andy brings a voice of knowledge and reason to the debate, his words may do no more to calm heated emotions than fire retardant does to stop catastrophic wildfires.

In Doyle, California, a town of 700 residents in rural Lassen County, “Volunteer Fire Chief Kathy Catron wants answers about why the Sugar fire ever grew large enough to burn her town, why it wasn’t put out before it exploded and turned uncontrollable,” the Times reports.

Catron’s animosity toward the Forest Service echoes a traditional distrust of federal agencies in rural communities, which are most susceptible to wildfires.

Exacerbating the distrust is a difference in philosophy between the Forest Service and many state and local agencies. According to the Times article, the California Department of Forestry and Fire Protection “aggressively works to stomp blazes out early — focused on protecting infrastructure and structures in areas that are often close to populated places.”

Scott Packwood, Cal Fire’s unit chief for the area where the Sugar fire eventually crossed from federal to state land, told the Times, “In my jurisdiction, I have been super aggressive in trying to put [fires] out small. … The Forest Service has different rules they work by.”

The Times reports that the National Wildfire Institute has charged that the decision to allow the Tamarack fire to burn “bears many hallmarks of criminal negligence” and called for an independent investigation.

While emotions understandably run high among those affected by wildfire, as Andy told the Times, blaming the Forest Service for fires is like “saying the U.S. Geological Service should be more aggressive in preventing earthquakes. … With fire, we seem to have a completely different, arrogant attitude that we can control this aspect of nature, and we can’t.”