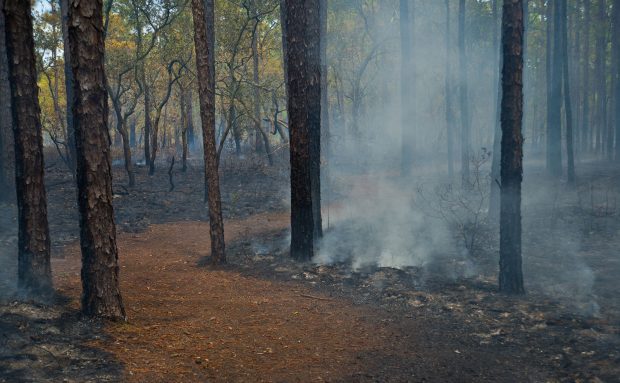 Prescribed fire is used to maintain forest health in a frequent-fire forest.

The 2020 wildfire season set a record for acres burned in the U.S. since 1983, and fire season started early for 2021 with drought conditions continuing across most of the country. At this writing, the U.S. Drought Monitor shows much of the West experiencing extreme and exceptional drought along with temperatures of 4-15 degrees above normal. In addition to ramping up firefighting resources, the Forest Service, other federal agencies, state agencies, and local governments are responding to the wildfire threat with increased spending for mitigation projects.

California allocated more than $500 million on wildfire prevention efforts just for springtime projects. Congress is getting involved with various pieces of legislation, and President Biden’s budget request calls for spending $1.7 billion “for high-priority hazardous fuels and forest resilience projects,” an increase of $476 million. If we learned nothing else from last year’s fires, it’s that weather-driven fires are unstoppable, which raises questions. Will this increased spending on fire mitigation benefit our forests? Will it benefit at-risk communities?

Most of our readers are likely familiar with the root problem. A century of fire suppression produced dense, overgrown forests that have proven more susceptible to pests, disease, drought, and catastrophic wildfire. The common-sense solution would seem to be simply thinning the forests to reduce wildfire risks, but fire ecologists say the issue is more complicated than that. A 2008 report by Reinhardt, Keane, Calkin, and Cohen cautions against acting on misconceptions about fuel treatments and their use as “a panacea for fire hazard reduction. … Given the right conditions, wildlands will inevitably burn.”

As the 2020 fires demonstrated, those conditions — high temperatures, low humidity, high wind — have become more common across the West, producing ever larger fires that account for the vast majority of acres burned each year. When fire conditions prevail, high winds carry embers for miles, jumping rivers, lakes, and fire lines. Reinhardt et al. also note that these fires burn through areas that have been thinned. In fact, without follow-up treatments, thinning can increase the intensity of large fires. The lower density of trees allows winds to blow with less obstruction, and more sunlight on the forest floor dries the ground and encourages flammable shrubs and invasive plants to grow and spread more rapidly. 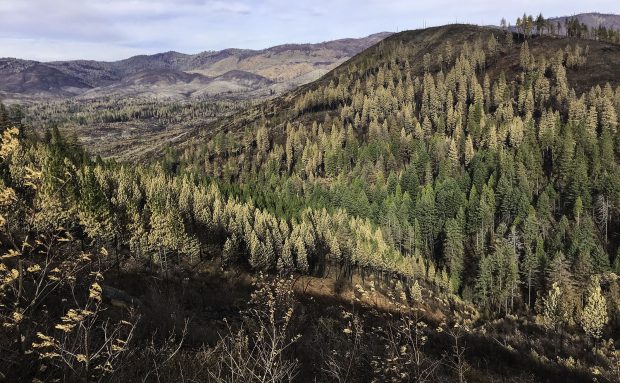 The Camp Fire in California, which destroyed the town of Paradise, burned more intensely in a previously logged area (foreground) than in an adjacent section of unlogged forest where mature trees survived the blaze (photo by Chad Hanson).

Maintaining the desired conditions requires ongoing, labor-intensive management and, according to a 1994 report by W.L. Baker, may take up to seven treatments before conditions resemble pre-fire suppression forests. John Muir Project Director Chad Hanson, a forest ecologist, said a growing body of research suggests that removing trees doesn’t protect forests from wildfire but may contribute to more intense wildfires. He and his fellow researchers have conducted multiple studies that support his opposition to logging and mechanical thinning of forests. A 2016 report that he co-authored concludes, “Forests with the highest levels of protection from logging tend to burn least severely.”

Mark Finney, a Forest Service research forester, studies the physical processes of fire spread. He led a team that studied the Hayman fire, which was then the largest Colorado wildfire on record. Finney’s team determined, ‘‘Fuel breaks and treatments were breached by massive spotting and intense surface fires. … Extreme environmental conditions … overwhelmed most fuel treatment effects. … Suppression efforts had little benefit from fuel modifications.” The team concluded that the primary objective of fuel treatments should be to make wildfire “less severe, rather than to reduce wildfire extent or make it easier to suppress.”

Finney promotes restoring fire-prone forests to conditions that mimic the forest structure prior to fire suppression policies. For millennia, he points out, Native American communities in fire-prone regions used fires to manage the landscape, shaping forests and grasslands in ways that minimized the community risk from fires as well as the likelihood of high-severity fires. Because our frequent-fire forests have changed so much since fire was removed from the landscape, Finney advocates for “structural restoration” as a way of returning western U.S. forests to “something that is sustainable.” The key, he asserts, is prescribed fire. 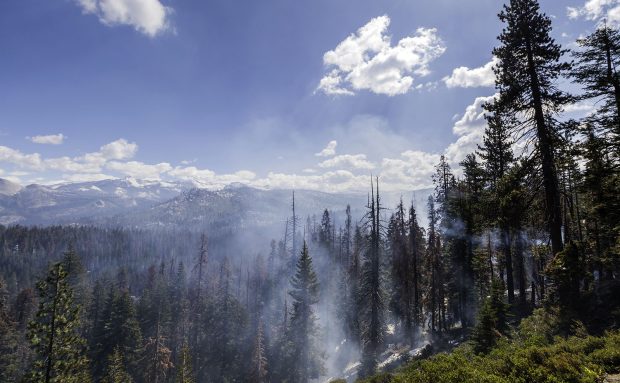 “Drier forest types were sustained by periodic burning.” As the local tribes recognized, the forest needs repeated management, “not one and done,” Finney remarked. “We get all wrapped around the axle because we’re not considering the maintenance. The only way to maintain a forest in a low-hazard condition is through repeated burning … but you can’t introduce fire without some mechanical treatment first. … You can’t restore structure without mechanical means.”

As Finney elaborates in a recent paper, “We believe that the primary goal of fuel treatment should be to create landscapes in which fire can occur without devastating consequences. Once these conditions have been achieved, wildfire need not be as vigorously suppressed and can itself play a role in maintaining these landscapes. Fuel treatments should not be used to reduce or eliminate fire from landscapes. Fuel treatment programs should … encourage a return of fire to the landscape and improve the resilience and sustainability of U.S. ecosystems.”

For Finney, the bottom line is that we’re playing catch-up, and we’ve got a lot of catching up to do. “We’ve been ignoring this for a long time. We need to get millions of acres under a treatment regime, and we need to think at landscape scales. We need to strategically begin to introduce treatments onto the landscape to obstruct fires from traveling so far.”

Finney contributed to a 2018 study addressing fuel loads in Sierra Nevada forests where severe drought “compounded by forest densification from decades of fire suppression” produced “unprecedented” tree mortality. The study concludes that wildfire severity “may be little affected” in the first decade following widespread tree mortality from bark beetles or drought. However, “extensive loading of large-sized woody fuels in future decades may contribute to dangerous mass fires. … Such intense fires could prevent forests from becoming re-established.”

Finney emphasizes that the combination of historical fire suppression combined with climate change create a lot of unknowns. “Our forests currently have high densities of susceptible trees. It’s unprecedented. … To do nothing would be very naïve. … It’s also important to have private landowners doing their part,” which finally gets us to the second question: How much will fire mitigation efforts benefit our communities?

In his most recent paper, Finney observes, “Engineering solutions to reduce vulnerability of buildings and other infrastructure to wildfires face few technical obstacles,” yet issues like cost and enforcement challenges “impede widespread adoption of changes in building design and materials.”

In this regard, Finney and Hanson agree. In fact, Hanson said fire mitigation efforts should start with homes and be limited to a 100-foot radius around each home. “We need to work from the home out to the forest.” After fireproofing homes and other buildings by cleaning gutters, installing metal roofs, and so forth, Hanson emphasizes defensible space, especially the 30-foot radius closest to the building, where dry grasses and small trees should be removed. He questions the value of “vegetation management” beyond 100 feet from the house but believes that, with a relatively small investment, most homeowners could be 95 percent effective at saving their homes from wildfire.

Without doubt, the wildfire situation is complicated, largely because more than a century of fire suppression has taken our forests into uncharted territory, but it has become clear to ecologists that fire is an integral part of our forests. As Finney said, “Fire is an excellent ally, and we’ve not taken advantage of that, partially through fear. … We’re more vulnerable to fire than the native peoples who had none of our technology. They used it routinely, and they persisted here for upwards of 10,000 years.”