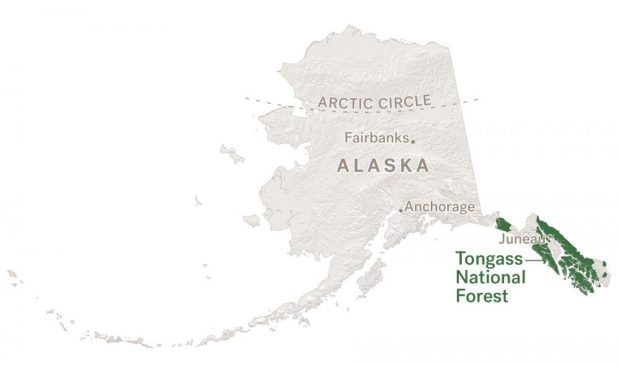 (Image courtesy of The Wilderness Society.)

As reported by Juliet Eilperin in The Washington Post, the Biden administration recently announced new protections for the  Tongass National Forest in southeastern Alaska, including an end to large-scale old-growth logging and a proposal to bar road construction on more than 9 million acres.

The move goes further than any previous president’s efforts to protect the 16.7 million-acre forest, which encompasses vast swaths of one of the world’s last relatively intact temperate rainforests and “is the only national forest where old-growth logging still takes place on an industrial scale.”

Agriculture Secretary Tom Vilsack said the proposal would provide $25 million for community development, noting that the time has come to focus on other economic activities like fishing, recreation and tourism. “This approach will help us chart the path to long-term economic opportunities that are sustainable and reflect southeast Alaska’s rich cultural heritage and magnificent natural resources.”

Plans for three major old-growth harvests in the Tongass have been canceled. Regarding the cancelled tree harvests, officials cited incomplete environmental analyses that are required by law prior to a final decision.

Eilperin reports that the Forest Service will offer limited sales of old growth for community and cultural uses, such as totem poles, canoes and weaving, “which would probably allow the region’s smaller mills to keep operating.”

Scientists have identified logging in Tongass as a future driver of planetary warming, because its ancient trees — many of which are at least three centuries old — absorb at least 8 percent of the carbon stored in the entire Lower 48 states’ forests combined.

“This is the most important thing that can happen in terms of preserving forests,” Beverly Law, a professor emeritus of global change biology at Oregon State University, said in a phone interview.

She noted that the carbon stored in old-growth trees can stay out of the atmosphere for about 1,000 years if they remain uncut, while research has found that about 65 percent of the carbon held by trees that are felled is released in the ensuing decades. “It’s becoming obvious to people who aren’t aware that our forests are the most effective way of taking up carbon and storing carbon for much longer than anywhere else.”

The Biden administration is working to “repeal or replace” a Trump-era rule allowing logging and other forms of development on millions of acres in the Tongass National Forest.

Millie Schoonover, a member of both the Craig Tribal and the Craig City councils, and Joel Jackson, president of the Organized Village of Kake, expressed support for the Biden’ administration’s actions. Jackson noted that the federal government had spent tens of millions of dollars a year subsidizing logging.

Austin Williams, Alaska director of law and policy for Trout Unlimited, said that the Forest Service had decided to “align itself with the economic realities of the region, where fishing, guiding and tourism have been the mainstays for decades.”

While FSEEE welcomes the Biden administration’s actions, we continue to advocate for congressional action, which would provide the strongest, longest-lasting protections for the Tongass.