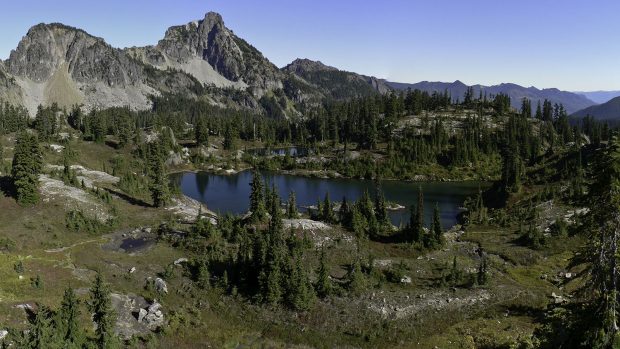 In December, the U.S. Fish and Wildlife Service (FWS) proposed listing whitebark pine (pinus albicaulisis) as threatened under the Endangered Species Act (ESA), nearly 30 years after protections were first proposed. Native to the mountains of the western United States and Canada, whitebark pine is considered a keystone species, and 75 percent of its U.S. habitat is on National Forest land. 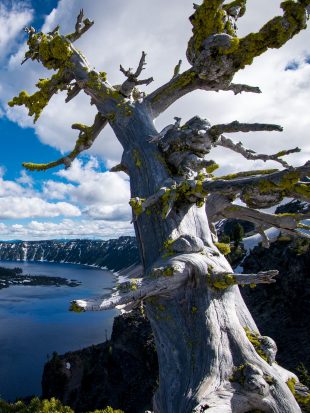 Whitebarks favor subalpine areas of the Sierra Nevada, Cascade Range, Pacific Coast Ranges, and Rocky Mountains from Wyoming north into Canada. Typically the highest-elevation pine tree in its range, whitebark pines often grow as krummholz—trees stunted by exposure to harsh conditions, especially at treeline. In more favorable settings, the trees can approach 100 feet in height, and they promote water conservation and aquifer recharge. Because of their spreading growth habit— more like a hardwood than a typical conifer—whitebark pines provide plenty of shade, slowing spring snowmelt to provide a more steady, sustained release of water.

But what makes the trees a keystone species are its pine cones, which yield seeds rich in fat and protein and serve as a food source for more than 100 animal species, including grizzly bears, Douglas squirrels, and Clark’s nutcrackers. Other species rely on the trees for habitat—northern flickers, mountain bluebirds, blue grouse, elk, sheep—and in Glacier National Park, 40 percent of the understory plants in whitebark forests grow only in those forests.

Without the tree’s seeds, the potential exists for a trophic cascade, in which the loss of a species alters the entire food chain. Given the tree’s ecological significance, “the health of the whitebark pine is very closely related to the health of the entire ecosystem,” retired Forest Service entomologist Jesse Logan told The Daily Climate. Blister rust fungus, introduced from Europe in 1910, has killed roughly 90 percent of the whitebark pines in some northern forests. At the same time, climate change is exacerbating droughts, wildfires, and bark beetle outbreaks, all of which contribute to high mortality rates for the species across its native habitat.

In the 31,000-square-mile greater Yellowstone ecosystem, beetle outbreaks wiped out more than 95 percent of the large trees by 2014. Since whitebark pines don’t reach optimum cone production until they’re 200 years old, the loss of so many large trees could be devastating. Researchers point to temperature as the primary driver of recent beetle outbreaks. Warmer temperatures have allowed far greater numbers of pine beetles to overwinter since the 1990s, exposing whitebarks to a threat they rarely experienced in previous decades. A century of fire suppression has only exacerbated the situation as the shade-intolerant trees rely on fire to create open areas where they can flourish. Without fires, trees like subalpine fir shade out the whitebarks.

Before this near-perfect storm of threats converged on whitebarks, the trees commonly lived 1,000 years or more, shaping their ecosystem in ways we may never fully understand. Given these threats, the proposed ESA listing is long overdue. The FWS concluded listing was warranted 10 years ago and said that the tree would go extinct without protections. At that time, however, the agency determined an ESA listing was precluded by higher priority actions due to limited resources, which is a polite way of saying that Congress has not provided adequate funding for ESA protections. 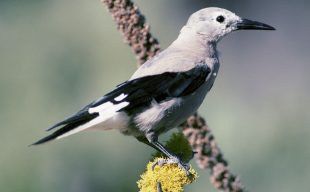 Clark’s nutcrackers rely on whitebark pine seeds as a food source, and in a symbiotic relationship, each bird stockpiles thousands of seeds each year, essentially planting them and ensuring new generations of trees (credit: David Menke, U.S. Fish and Wildlife Service).

Even without a listing, the Forest Service has been studying ways to rejuvenate whitebark forests and, along with the Whitebark Pine Ecosystem Foundation and American Forests, is engaged in breeding and planting whitebarks resistant to drought and blister rust. Robert Keane II, a research ecologist at the Forest Service Rocky Mountain Research Station in Montana, has studied whitebark pine for more than three decades and is a principal investigator in whitebark pine restoration studies. Keane’s work supports the National Whitebark Pine Restoration Plan, which he described as “a joint project between the Forest Service, the Interior Department, American Forests, and the Whitebark Pine Ecosystem Foundation.”

“Building rust resistance is the core of the restoration plan, and much of the plan is dedicated to facilitating diverse resistance across all populations of whitebark pine,” Keane said. “The Fish and Wildlife Service has been aware of this effort and is hoping that this plan will constitute some or most of the (ESA) recovery plan.” That recovery plan is expected to be finalized in about a year, which should help to expedite ESA planning efforts. Given ongoing conservation work by the Forest Service, “I don’t see any change in Forest Service policy on this issue,” Keane added.

Dr. Diana Tomback, professor of integrated biology at the University of Colorado-Denver, serves as the Whitebark Pine Ecosystem Foundation’s policy and outreach coordinator. “Whitebark pine is the poster child for the extreme harms of exotic disease and climate change,” she said. “Luckily, we have the tools and capability to make whitebark populations more resilient. The National Whitebark Pine Restoration Plan, which will implement these restoration tools, offers a new model for forest restoration and management.”

In spite of the dire plight of this iconic species, Tomback and Sprague’s assessments offer a bit of optimism about its future, and that optimism gets a boost from the “paleo” record. Core samples of lake sediments dating back 15,000 years contain enough whitebark charcoal and pollen to indicate the tree thrived under warmer conditions with more frequent wildfires. Cathy Whitlock, a fellow at Montana State University, led the MSU team that studied the samples. “In the warmest periods, the whitebark pine was really pretty happy,” she told The Daily Climate. “The paleo perspective gives you really good insight,” especially when it comes to climate change. 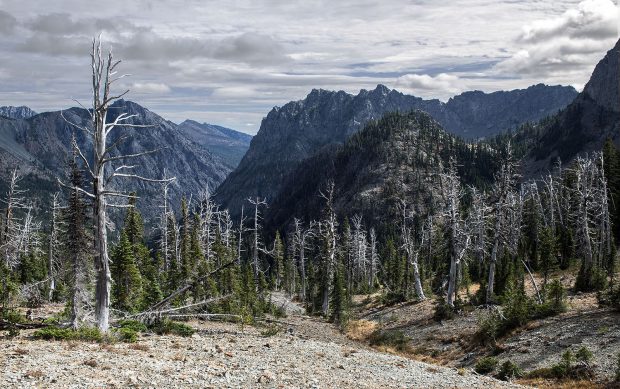