In February 2019, ecologist Thomas Crowther declared that planting 1.2 trillion trees would cancel out the last 10 years of carbon dioxide emissions and help mitigate climate change. Crowther based his statement on the results of a study produced at the Swiss research lab he founded. A year later, the One Trillion Tree Initiative was announced at the 2020 World Economic Forum, where President Trump committed the United States to participating in the program.

Since Trump’s announcement, U.S. Rep. Bruce Westerman, R-Ark., has introduced H.R. 5859 to create the Trillion Trees Act, which calls for increasing the number of trees planted in the U.S. from 2.5 billion to 3.3 billion per year. Few people would argue that planting trees is bad, but the Crowther Lab study, Trump’s support for One Trillion Trees and Westerman’s bill all raise questions.

Professor Forrest Fleischman, Ph.D., in the Department of Forest Resources at the University of Minnesota and former FSEEE employee, questions the basic premise of planting a trillion trees. He contributed to a recent research effort that shows the Crowther study overestimates the land available to plant trees by about five times. Fleischman has also studied large-scale tree-planting efforts in India, where the government has allocated hundreds of millions of dollars to plant trees for ecological restoration.

“There’s pressure to plant trees wherever you can, and they’re planting trees in a lot of places where they really don’t need to,” Fleischman said. Planting trees can even be counterproductive in many places because naturally regenerated forests tend to grow faster, absorb more carbon, have more biodiversity, and provide better quality forests. 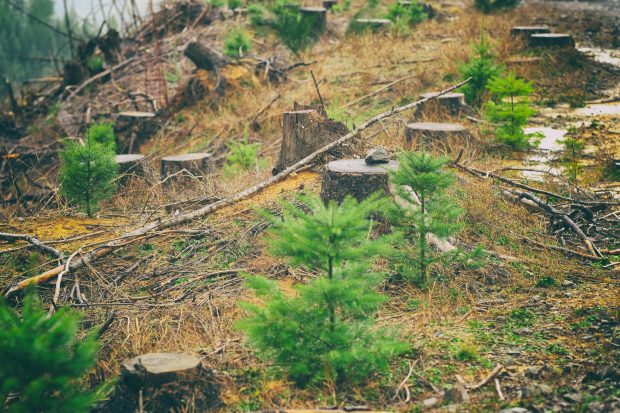 Jim Lutz, a professor of forest ecology at Utah State University, points to peatlands, which sequester more carbon than any other type of land. Yet humans continue to drain them to make way for things like palm tree plantations to produce cheap cooking oil.

After studying the trees in 48 different forest plots, Lutz recently published a research paper showing that the largest 1 percent of trees contain half of all the aboveground live biomass and, therefore, half of all the carbon. While he supports planting trees, Lutz is more concerned about how many of those trees will thrive and grow old than with the number of trees planted.

As the saying goes, “Actions speak louder than words,” and Trump’s relevant actions include rolling back regulations to reduce greenhouse gas emissions, opening millions of acres of public lands to fossil fuel extraction, withdrawing the U.S. from the Paris climate agreement, and denigrating climate activists. The Trump Administration also supports logging in Tongass National Forest, part of the world’s largest temperate rainforest and an invaluable resource for carbon sequestration. As Lutz’s paper makes clear, planting trees would never compensate for the loss of old-growth trees in the Tongass.

Even while confronted with the COVID-19 emergency and a worldwide oil glut, Trump has proceeded with actions to open more public lands to oil and gas development and undermine environmental protections. None of the scientific evidence suggests that planting trees would offset the damage done by these actions. The obvious conclusion is that Trump’s commitment to planting trees is an easy way to claim he’s doing something for the environment while continuing to do the opposite.

But what about Westerman’s proposed Trillion Trees Act? The Arkansas congressman holds a master’s degree in forestry and has worked as a professional forester. As Westerman was preparing to introduce his bill in Congress, he wrote an editorial for Fox News in which he endorses and exaggerates the conclusions of the Crowther study. He then states, in addition to planting trees, “we need to simultaneously be harvesting billions of trees and manufacturing that wood to fully utilize forests’ capacity to remove and store carbon.”

Nonetheless, Westerman’s bill proposes “market incentives” (tax credits) based on “sustainability scores” for new construction. These scores would calculate a building’s carbon sequestration based on the use of “sustainable” construction materials, i.e., wood products. In other words, Westerman’s bill looks a lot more like a stimulus package for the timber industry than a serious effort to sequester carbon and combat climate change. By proposing large-scale tree planting while continuing to harvest “billions of trees,” Westerman is supporting exactly the type of activity that Fleischman, Lutz and others have demonstrated to be counterproductive for both carbon sequestration and forest health.

Lutz conducts some of his research at the U.S. Forest Service Wind River Experimental Forest in southern Washington, which includes a stand of old-growth forest. A young stand of trees adjacent to the old-growth stand has many more trees per acre, yet it holds less than a quarter of the carbon of the old-growth stand. Ben Vierra of the National Ecological Observatory Network explained that adding just a thin annual growth layer to a massive old-growth tree is a big deal when it comes to sequestering carbon. 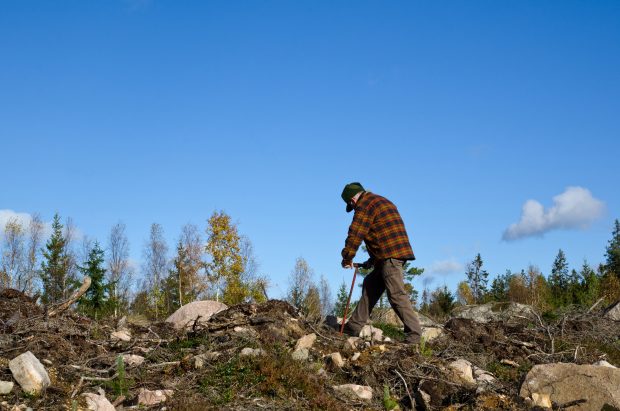 Fleischman said he supports planting trees to help reestablish forests in areas that have suffered from deforestation, but reforestation bears little resemblance to the plantation-style tree planting and harvesting promoted by Westerman’s bill. Fleischman points to work being done in eastern Brazil, where there is a long history of deforestation.

“They’re trying to figure out what’s the most cost-effective way to restore forests. What they’re finding is what they call ‘assisted natural regeneration’ is the best way to go.” Fleischman explained that this approach typically involves low-density tree planting — “planting a diversity of trees kind of scattered around and then the forest naturally fills in around them. This approach tends to be much cheaper than high-intensity tree planting,” and it “tends to give you a better long-term outcome.”

Fleischman observed that, with large-scale tree planting efforts like Trillion Trees, “we’re seeing people planting trees in rows, often with blocks of a single species.” This plantation scenario is exactly the kind of tree-planting that Westerman’s bill supports, but Fleischman’s research indicates that, in this artificial forest structure, the trees don’t store as much carbon. With each stand of trees being the same age and species, they also tend to die at the same time, and they are more susceptible to pests and disease. “For a natural forest, you want more complexity, and more complexity will lead to more carbon storage.”

As Fleischman said, “The basic point is that trees don’t need to be planted unless you are trying to change the species mix for commercial purposes. In the vast majority of places in the U.S. where trees can grow, they will grow naturally without someone spending money on planting them.”

Fleischman’s expertise stands at the intersection of political science and environmental policy, providing more of a “big picture” perspective than that of some forestry experts. He concluded, “If the goal is carbon storage, planting trees is not a particularly useful strategy. The main thing you need to do is change the socioeconomic system that makes it more profitable for people to convert forests into commercial agricultural production. And if you do too much of that, you might end up driving up the cost of food.

“We need to shift our thinking from planting trees to how can we figure out how to get the people who live there to be incentivized to grow a forest in the long run.”

The other side of the coin, which Trump and Westerman ignore, is deforestation. Fleischman observed, “The big analyses that have been done of the causes of deforestation point to the importance of commercial export-oriented agriculture. A lot of deforestation, for example in the Amazon, is being driven by cultivation of soybeans and cattle ranches. In Indonesia and Southeast Asia, it’s being driven by oil palm (tree plantations).”

Since the relevant science demonstrates that preventing the destruction of natural forests is more important than planting trees, Fleischman concluded that our attention should be focused on reducing demand for these export commodities, a significant proportion of which is imported into the United States.