Retardant use spikes as crews fight blazes — and COVID-19 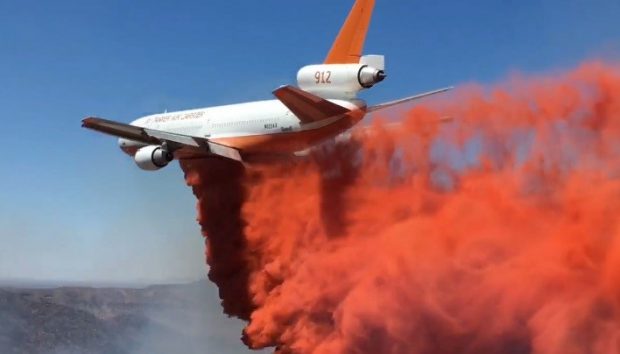 This wildfire season could be a banner year for chemical fire retardants.

The COVID-19 pandemic is part of the reason. With the Forest Service under pressure to stop wildfires before they become big enough to require big fire crews on the ground, measures like aerial fire retardant could gain new importance — and refresh a debate over their environmental impact and effectiveness.

The last time the Forest Service studied the environmental effects of aerial fire retardant was nine years ago. That environmental impact statement found the main risk is to aquatic wildlife, and the dangers could be lessened by not applying fire retardant within 300 feet of streams and lakes, and through better mapping to show areas to avoid.

At that time, the Forest Service ruled out restricting fire retardant use to situations where the benefits far outweigh the risk, saying, “A primary benefit of aerial application of fire retardant is that it enables firefighters to contain fires more quickly and more safely, thus, reducing property damage and threats to human safety by reducing fire intensity and rate of spread under certain fuel and fire behavior conditions.”

Stahl told E&E News he doesn’t believe the chemicals are as effective as the agency has said — or that officials even have a clear idea.

Among the challenges, Stahl said, is that the agency measures retardants’ success by how often they hit the intended target, not how the fire responded.

“It would be like measuring a vaccine’s effectiveness on how well needles hit arms, not whether disease is prevented,” Stahl said. “Crazy.”

Dispatch, FSEEE in the News