We all know this about dogs—they’re serious sniffers. Now, biologists are putting that olfactory prowess to work to help save an endangered lizard in California. 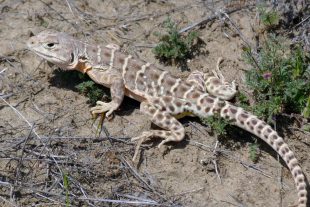 Blunt-nosed leopard lizards used to be common in the San Joaquin Valley. But their populations have plummeted due to habitat disruption and they’re now listed as endangered. They’re strong little fellows—able to leap about two feet to gobble up prey.

Discerning the location of the rare reptiles is one of the main priorities for wildlife managers. The traditional way of doing that is by trying to find them by sight or by locating their scat. Both methods are problematic—the first carries the risk of adding stress for creatures already under duress. The second is difficult, because the lizards’ poop resembles that of many other species, and it’s hard to find.

Enter the clever canines. Researchers trained three dogs—a German shepherd and two border collies—to recognize the scent of blunt-nosed lizard scat. They roam the arid landscape, and lie down when they detect a deposit that carries the correct scent. Scientists are then able to gather the scat, document its location and examine its DNA.

Dogs have already been used to detect a whole range of species, from mink to wolves and cougars. Researchers hope to add a variety of other reptiles to the list.

The results of the efforts are detailed in a study released last week in The Journal of Wildlife Management.

“So many reptilian species have been hit so hard,” Mark Statham, the study’s lead author and associate researcher with the Mammalian Ecology and Conservation Unit of the UC Davis School of Veterinary Medicine, told CNN. “A large proportion of them are endangered or threatened. This is a really valuable way for people to be able to survey them.”