David Bernhardt, a former lobbyist for the oil and gas industry who has drawn intense criticism for alleged conflicts of interest during his stint as a top official in the Trump administration’s Department of the Interior, was confirmed as permanent Secretary of the Interior in a 56-41 Senate vote yesterday. 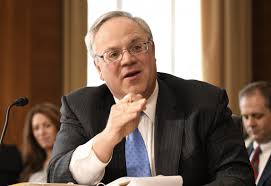 Bernhardt has a long history of working on petroleum issues, both inside and outside government. He worked as solicitor for the Interior Department under the George W. Bush administration. He later left government and spent years as a lobbyist. His clients included Halliburton Energy Services, Targa Resources, Eni Petroleum, Sempra Energy and Noble Energy. He also did lobbying work for Westlands Water District, which represents farmers in California’s Central Valley.

Critics point to numerous actions taken by the Interior Department during the Trump administration that have favored Bernhardt’s former clients. Bernhardt was named deputy secretary of the interior in 2017, and served as acting interior secretary after former secretary Ryan Zinke left office at the beginning of this year under numerous ethical clouds.

In addition to drawing criticism for his actions under Trump in favor of the oil and gas industry, Bernhardt has drawn fire for working to undermine the Endangered Species Act and supporting other Trump administration initiatives seen as harmful to wildlife. He has also been criticized for taking steps to keep his schedule and his on-the-job activities shielded from public view.

When Bernhardt joined the Trump administration in 2017, he was required to recuse himself from participating in matters involving more than two dozen former clients. Some of those recusals expired after a year, and the others will expire two years after he joined the administration.

Bernhardt has been unabashed in his support for expanding oil and gas production on the 500 million acres overseen by the interior department and on wide stretches of coastal waters. After Trump signed two executive orders on Wednesday calling for more oil and gas production, Bernhardt quickly released a statement praising the move.

“Ryan Zinke left office in disgrace amid a self-generated ethical hurricane,” said Oregon Sen. Ron Wyden in a prepared statement. “Rather than taking an opportunity to restore public trust and integrity to the office of the Secretary, the Senate just confirmed an Interior Secretary who could quite possibly face immediate investigations of his own. The ethical storm clouds are already gathering, and I fear a Bernhardt typhoon may be on the way.”