The Bureau of Land Management is considering a request to allow 20,000 more people to attend the Burning Man celebration in Nevada’s Black Rock Desert each year. Currently, 80,000 people are permitted to attend the event. 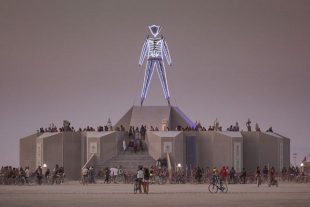 In a draft environmental impact statement released Friday, BLM officials considered alternatives for accommodating the annual alternative arts festival. The agency’s preferred alternative calls for allowing 5,000 additional attendees in each of the next four years, with attendance capped at 100,000.

BLM officials are considering a request for a special recreation permit to sanction Burning Man gatherings for the next 10 years. This year’s event is scheduled to start on Aug. 25 and run until Labor Day.

The draft EIS examines the likely effects of a variety of options, including keeping current participant levels the same as they are now and lowering the maximum number of participants to 50,000 people.

A number of impacts are identified in the report, including possible harm to birds and other wildlife and smoke emissions from burning “the Man,” a 75-foot-tall wooden effigy that stands at the heart of the gathering.

BLM officials will accept public comments on the draft EIS through April 29.