The 2013 Rim Fire burned more than 250,000 acres in Yosemite National Park and the adjacent Stanislaus National Forest, making it the largest fire ever recorded in the Sierra Nevada. 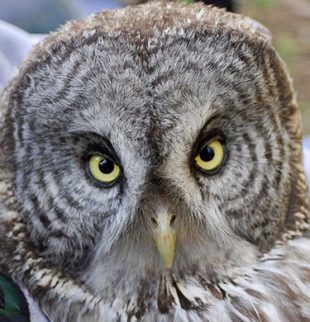 Great gray owls are among the largest owls in the world. National Park Service photo.

The fire spurred fears that the blaze could decimate the birds, which are among the largest owls in the world.

A study published this month in the journal The Condor: Ornithological Applications shows that not to be the case: Owls continued to occupy their favorite spots within the Rim Fire’s perimeter in the three years following the blaze.

Researchers surveyed meadows next to known or suspected owl nesting sites, both within and just beyond the fire’s perimeter. Great gray owls typically nest in large snags next to meadows, where they hunt for rodents.

The surveys included 22 meadows within the Rim Fire’s reach where great gray owls had been detected during surveys conducted in the decade prior to the blaze. Owls were detected in 21 of the meadows in surveys conducted after the fire. Researchers detected owls in areas that burned with relatively low intensity and in stands that were severely burned in the fire.

In addition to direct observational surveys, the study used modeling techniques to gauge the welfare of the owls following the Rim Fire.

“Our model, based on data from 144 sites surveyed at least once before the fire, yielded colonization and persistence rates within the fire perimeter that did not decrease after the fire, with persistence actually increasing markedly after the fire, irrespective of land ownership,” the researchers wrote.

The study’s authors suggest that the fire may have created more snags suitable for nesting sites. Another possibility is that the fire enhanced habitat for voles and pocket gophers, which are the owls’ main prey.

While the study’s authors cautioned that more research is needed, the paper suggests that the owls’ success following the fire may have implications for forest management.

“The Great Gray Owls we studied appeared to be resilient to the Rim (F)ire during the (three years) after it burned,” the study says, “suggesting that fuel reduction treatments targeted in Great Gray Owl habitat may not be warranted for facilitating post-fire persistence at burned sites in the short-term.”