A mysterious disease first detected seven years ago is attacking beech trees in Ohio and Pennsylvania. Scientists are scrambling to find the cause as the disease spreads rapidly. 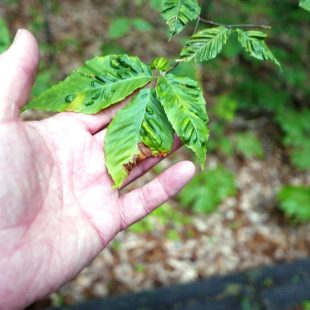 Scientists are scrambling to find the cause of a disease that is attacking beech trees in Ohio and Pennsylvania. Ohio State University photo.

Beech leaf disease has been detected in 11 counties in Ohio, eight in Pennsylvania, and also in the Canadian province of Ontario. A recently published study in the journal Forest Pathology warns that the disease has also affected European and Oriental beech trees in nurseries, meaning it could attack species of beech throughout the northern hemisphere.

“It’s hard at this point to say where this disease will go, but it has all the hallmarks of something like emerald ash borer or sudden oak death, threats to trees that start slowly and quickly pick up speed,” said Ohio State University researcher Enrico Bonello, one of the study’s authors. “We seem to be in that rapid expansion phase right now.”

Affected trees first show dark bands in their leaves. The leaves then become crinkly and shrunken, and the afflicted tree eventually dies.

Scientists suspect that the cause of the disease is a microbe rather than an insect. They are comparing the DNA and RNA of affected trees and healthy trees in an attempt to pinpoint the cause.

The paper estimates that the cost of losing half of Ohio’s beech trees would be about $225 million. Beech forests offer valuable habitat for a variety of wildlife. Beech nuts are also an important food source.

American beech trees are found throughout the eastern portion of the United States.