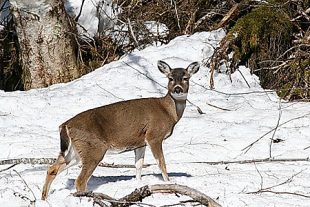 The ruling comes after a 10-year legal battle staged by the groups Greenpeace USA and Cascadia Wildlands. The plaintiffs argued that Tongass officials underestimated the toll the logging would take on Sitka black-tailed deer and the rare Alexander Archipelago wolf that preys on them—and on subsistence hunters who depend on healthy populations of the two species.

A three-judge panel of the Ninth Circuit Court of Appeals found that the Forest Service consistently overestimated deer populations in the vicinity of the proposed timber sales and refused to revise its population estimates.

In a four-page ruling, the panel asserted that the Forest Service “has been given multiple opportunities to correct flaws in its project analysis and has ignored this court’s guidance.”

The four timber sales, all in the southern portion of the Tongass, would have clear-cut 1,700 acres of old-growth temperate rainforest. About 14 miles of logging roads also would have been constructed.

“(T)he victory is for more than deer, wolves and hunters,” said Larry Edwards, a Greenpeace representative who lives in Sitka, Alaska. “It also protects many other kinds of wildlife in those areas, diverse forest uses, and carbon that is stored in the soil, trees and vegetation. As a far-north coastal rainforest, fires are rare and very small here, and as a result the Tongass is world-renown for storing carbon in its soil, trees and vegetation.”

Two of the project areas were slated to be logged in 2019.