The word “interim” can be removed from her title.

Vicki Christiansen, who has served as interim chief of the Forest Service since March, was sworn in as the agency’s permanent chief during a ceremony this morning in Washington, D.C. 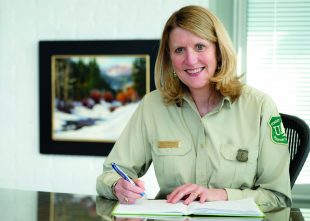 Christiansen, who served as state forester for Arizona and Washington before joining the Forest Service in 2010, has a background in wildfire management. She served as Deputy Chief for State and Private Forestry before being named interim chief.

Before administering the oath of office, Secretary of Agriculture Sonny Perdue emphasized the need for the Forest Service to work with state and local officials on forest management issues.

Christiansen echoed that sentiment in brief remarks following her swearing-in.

“There are others that can really help us make things happen,” she told an audience largely comprised of Forest Service employees. “And we need to unlock their innovations. And we are going to take some risks and we are going to innovate together.”

Christiansen accepted the interim chief role following the resignation of Tony Tooke, who had been accused of sexual misconduct. During her remarks, Christiansen acknowledged the need to address workplace harassment.

“We cannot achieve our mission unless we have a safe and respectful work environment for everyone,” she said. “That’s what every one of you deserve and what the American people expect.”