A major expansion of a ski area on national forest land just 50 miles outside of Las Vegas is now out for public review.

The owners of the Lee Canyon ski area, on the Humboldt-Toiyabe National Forest, want to build a bevy of year-round recreational attractions, including zip lines, bike trails and a “mountain coaster” that would whisk thrill-seekers downhill in cars cruising on elevated metal tracks. 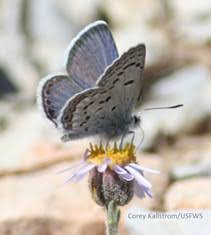 The $35 million proposal, detailed in a draft environmental impact statement released late last week, would include doubling the resort’s acreage and also adding chairlifts and snowmaking facilities. The ski area, which was previously called the Las Vegas Ski & Snowboard Resort, has operated on the site since 1962.

Environmentalists have raised concerns about the expansion’s impact on the Mount Charleston blue butterfly, which is listed as endangered by the U.S. Fish and Wildlife Service.

The draft environmental impact statement indicates that the expansion would likely cause some short-term harm to the butterfly, but could ultimately benefit the insects by opening now-forested areas to sun-loving plants favored by the butterflies.

The Forest Service is accepting comments on the proposal through Oct. 1.

“The Forest is eager to hear what the public thinks and if there are other considerations to take into account before a final decision is made,” said Humboldt-Toiyabe National Forest Supervisor Bill Dunkelberger in a prepared statement.