What’s some people’s idea of a good time? Taking that four-wheel drive and tearing through a wild meadow! 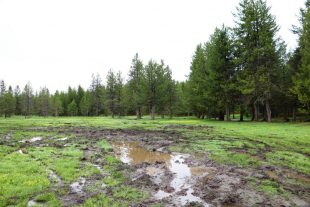 “Wet meadows like these are critical components to the forest ecosystem and damage like this impacts everything from fish to big game species,” said Emmett District Ranger Richard Newton. “We encourage appropriate motorized recreation on the forest, but users must stay on designated routes for the protection of resources.”

A witness reported seeing two “jeep-like” vehicles in the area, but the culprits have not been identified. The vehicles left behind deep ruts in once-pristine Tripod Meadows.

Mud bogging is an ongoing problem on national forests and other public lands across the country. The activity kills native plants, clogs waterways with sediment, and compacts soil. Repair work often costs thousands of dollars.

Under federal law, violators could face fines up to $5,000 and six months in jail, and also and be billed for restoration costs.