Can Cities Be Saved from Wildfires?

On June 20, 2010, someone (authorities never found the culprit) left a campfire unattended in the forested mountains just north of Flagstaff, Arizona. The day was sunny and warm, with a stiff afternoon wind blowing in from the southwest—perfect conditions for a wildfire. The flames broke loose and leapt eagerly through the arid woods.

The Schultz Fire burned fast and hot. Well over half of the conflagration’s 15,075 acres burned on that first day, lofting impressive billows of smoke skyward. It soon stalled; fire officials declared the fire 100 percent contained just ten days later. The flames came close to several houses but no structures were burned. A bullet had been dodged, or so it seemed.

But that was just the start. Two-thirds of the acres covered by the Schultz Fire burned at moderate to high intensity, much of it on very steep slopes. Fire that hot, on that type of terrain, leaves behind a landscape that is susceptible to flooding. The fire-scorched soil loses its capacity to soak up water. The vegetation that once anchored the soil is gone.

That year, Arizona’s monsoon season began on July 16, when a moderate rain sprinkled down on the scorched slopes. The water flowed in ashy rivulets but did little damage.

Four days later, the rains arrived in earnest. A cloudburst drenched the San Francisco Peaks, including the area that burned in the Schultz Fire. In one 10-minute period, nearly an inch of rain fell. This time, the rainwater gathered and galloped. Rushing rivers, gray with ash and sediment, formed in just minutes. The muddy waters moved boulders and scoured gullies down to bedrock. Residents in suburban neighborhoods in the valley below heard the flood coming; they said it sounded like an avalanche or a jet engine. The floodwaters damaged dozens of homes and snapped a pipeline that provides water to Flagstaff. A 12-year-old girl died.

More debris flows and flooding followed that summer. The monsoon season of 2010 would prove to be the fourth wettest ever recorded in Flagstaff.

In November of 2012, residents of Flagstaff went to the polls. One of the items on the ballot was a proposal for a $10 million municipal bond that would pay for thinning about 11,000 acres in and around the city. The thinning would help firefighters stop wildfires like the Schultz Fire, bond supporters claimed, and thus protect Flagstaff’s sources of drinking water. And, by thinning the steep slopes of the Dry Lake Hills, which abut the city’s northern boundary, the project would lessen the chance that a wildfire would rage into the city itself.

The Schultz Fire, still fresh in people’s minds, proved more effective than any number of yard signs or campaign ads. The measure passed easily, garnering the approval of nearly three-quarters of voters. 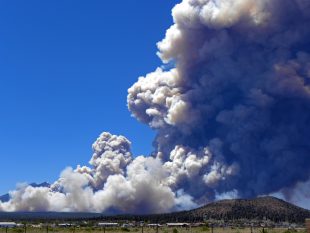 In approving the bond, the voters gave the go-ahead to a forestry project unlike any that has been attempted before. The majority of the acreage that is to be thinned under the Flagstaff Watershed Protection Project is not under city jurisdiction, but rather is part of the Coconino National Forest, which surrounds the city. Money generated from a municipal bond has never before been used to finance a thinning project on land managed by the U.S. Forest Service.

The project started on a promising note, with crews thinning and conducting prescribed burning on portions of the project under city and state jurisdiction. Unlike parts of the project that are in the national forest, those areas required relatively little environmental review. All told, about 5,000 acres have been thinned and/or burned.

But the project ran into some trouble last year, when city staffers realized that the remaining work, which includes the areas that experts say pose the greatest risks, will be much more expensive than anticipated.

According to a city staff report prepared in February, the cost of thinning in the Dry Lake Hills area “will be anywhere from 2-5 times as expensive as previously anticipated.”

All told, officials overseeing the project estimate the funding shortfall stands at about $4.5 million. City officials are considering ways to fill the gap, possibly by asking residents to approve a supplemental bond.

The cost overruns for the Flagstaff project point to a fundamental reality that often stymies efforts to make wide stretches of forests in the West more “resilient” to wildfire: Doing so, it turns out, costs a lot of money.

In addition to the $10 million raised by the bond, other entities—mainly the U.S. Forest Service—have contributed nearly $5 million toward the project. According to the February city council report, funds are lacking for work planned on 3,766 acres. Given current estimates, that means thinning about 7,200 acres will cost about $15 million. That translates to more than $2,000 an acre.

That’s the sort of math that has frustrated much larger forest restoration projects in the Southwest, most notably the Four Forest Restoration Initiative, which aims to thin 2.4 million acres of national forests in northern Arizona. Only a fraction of the planned thinning has taken place.

Officials involved with the Flagstaff project point to a number of factors behind the ballooning expenses.

Those include initial overestimates of the value of some of the timber slated for logging, the need to protect habitat for rare species such as the Mexican spotted owl, and the difficulty of thinning stands of trees on steep slopes.

Helicopter logging had been planned for some of the steeper, more sensitive terrain in the Dry Lake Hills. Jessica Richardson of the Coconino National Forest, who is the Forest Service’s point person on the Flagstaff project, said that some of the quotes for helicopter logging came in as high as $10,000 an acre.

Another problem is a lack of infrastructure to handle the slash and debris that must be removed. A significant market for small-diameter trees and slash has not developed in the region, despite a readily available supply.

“We had hoped that some sort of infrastructure would have sprung up,” said Matt Millar, who works for the Flagstaff Fire Department and serves as the operations specialist for the watershed protection project. “That just has not happened at all. And that’s the biggest challenge of the whole thing.”

Despite the rising costs, however, Richardson said the Forest Service is pleased with how the project has gone. “We are very happy with the progress made so far, even though we have not seen the total number of acres treated that we had hoped for yet,” she said. “There are lots of things happening behind the scenes.”

Flagstaff isn’t the only city that would like to lessen its vulnerability to wildfires. Santa Fe, New Mexico, has undertaken extensive thinning work, as well. And in 2010, the same year as the Schultz Fire, city officials and community partners in Ashland, Oregon, launched a similar project, albeit with different funding sources.

Ashland, home to the renowned annual Oregon Shakespeare Festival, sits on a forested slope of the Siskiyou Mountains. The Ashland Forest Resiliency Stewardship Project was launched after local officials landed a $6.2 million federal stimulus grant. Sometime in the next few years, officials expect to finish thinning on about 14,500 acres surrounding the city.

Like Flagstaff, the Ashland project aims to protect the city’s water supply as well as lessen the risk of wildfire.  The city draws its water from Reeder Reservoir, which is fed by Ashland Creek. The watershed has burned before and can be expected to burn again. Ashland residents are hopeful that when the next fire burns, though, it can be controlled in a way that minimizes erosion and damage to the city’s water supply.

The total cost for the Ashland project is expected to be about $26 million, according to Chris Chambers, who heads the city’s forestry division. That works out to about $1,800 per acre.

Chambers is confident that the project will significantly lessen the risk of a devastating wildfire and subsequent flooding in the forests immediately surrounding the city. Those relatively low-elevation stands, he says, were the ones that were furthest removed from their historical conditions.

Higher up in the mountains, however, moister forests are more or less unchanged. Historically, those forests did not burn nearly as frequently as the drier forests lower down the mountain slopes—but they did indeed burn, probably about twice a century.

Chambers worries that a major fire could strike those forests and damage the city’s watershed. That produces a genuine dilemma—how should those stands be managed?

“That’s going to be a real head-scratcher when we get to the end of this,” he said. “My biggest worry is that we get a fire in that upper elevation of the watershed.”

In 2010, according to a Forest Service study, 99 million people—about one in three Americans—lived in the wildland-urban interface, and were thus vulnerable to wildfires. That number has only grown in the years since.

Those people occupied an overall area that covered more than 190 million acres—nearly 10 percent of the total land area of the contiguous United States. Even the staunchest supporters of projects like the ones being undertaken in Flagstaff and Ashland acknowledge that thinning the entire wildland-urban interface would be prohibitively expensive; at $2,000 per acre, the final tally would be $380 billion—or roughly 75 times the Forest Service’s annual budget.

And there’s this: To be effective, treated areas will need to be thinned periodically in the future, either through mechanical thinning or prescribed burning. Vegetation, after all, grows back.

When a wildfire burns in hot, dry, windy conditions—“fire weather”—even the most intense firefighting efforts often fail to make an impact. Members of the public and their elected officials expect firefighting agencies to extinguish the flames anyway, which is one of the main reasons that firefighting now consumes well over half of the Forest Service’s annual budget.

Emotion aside, though, the question of how and when to fight wildfires—and how to go about safeguarding the millions of people who live next to fire-prone forests—comes down to that question of dollars and cents.

In 2013, researchers at Northern Arizona University released a study showing that the Schultz Fire claimed a total cost of between $133 million and $147 million. That cost included about $59 million spent by government agencies and utilities to deal with the immediate emergency, and another $59 million in lost property values.

That means that every acre that burned cost about $10,000. If thinning the forest at a cost of $2,000 acres could prevent a fire like Schultz, the investment would be well worth it from a purely economic standpoint.

Supporters of the Flagstaff and Ashland projects acknowledge that they won’t know for sure how effective the work has been until the next wildfire strikes. However, they are confident that restoring the forests to a closer semblance of how they were before decades of fire suppression and logging will indeed make them less vulnerable to intense fires.

“I think we have a fairly high level of confidence that doing the work we’re doing will help prevent a high-severity fire,” Millar said. “But fire is a natural ecological process. We can’t always control how it is going to behave.”