The project calls for logging more than 500 acres of old-growth forest on North Kuiu Island, between the towns of Sitka and Petersburg. The timber sale has been in the works for more than a decade; the Forest Service issued its final environmental impact statement for the project in 2007.

In a lawsuit filed earlier today, conservationists allege that the agency is violating the National Environmental Policy Act by not conducting a supplemental review of the timber sale. They say much has changed since the Forest Service first approved the project. The island has become an increasingly popular ecotourism destination, and wildlife populations on the island have declined significantly over that span. 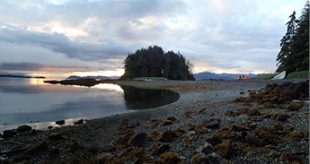 Many visitors arrive on small-sized cruise ships that can navigate the island’s narrow bays and channels. If the logging proceeds, clearcuts will be visible from some of the island’s most scenic bays.

“Southeast Alaska’s economy has moved beyond the clearcuts of the past, and Kuiu Island is an example of that shift,” said Andy Moderow of the Alaska Wilderness League, one of seven groups suing the Forest Service. “Beautiful wilderness and abundant salmon and wildlife are what makes the Tongass a world‐class tourism and fishing destination.”

Opponents say the project is only viable from an economic perspective because the Forest Service has agreed to spend more than $3 million in public funds to build roads to facilitate the logging.

“The passenger capacity for the small cruise ship fleet in Southeast Alaska has more than doubled since 2011 and is still expanding by adding vessels, new itineraries and expanding seasons to meet market demand for the southeast Alaskan wilderness experience,” said Hunter McIntosh, president of The Boat Company, which is also party to the lawsuit. “Almost all of these vessels operate along northern and central southeast Alaska marine travel routes that require access to North Kuiu Island.”