A Win for Warblers

This week, the U.S. Fish and Wildlife Service announced it intends to remove the Kirtland’s warbler from the threatened and endangered species list. The small songbird was one of the first species to be protected under the act. 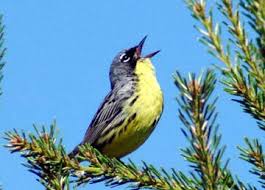 Kirtland’s warblers only build nests in stands of young jack pines—a habitat that was once common in the forests of Michigan before fire-suppression efforts allowed stands to grow into mature forests unsuitable for the birds.

Warbler numbers also tumbled due to competition from brown-headed cowbirds. Those birds lay their eggs in the nests of other species, including Kirtland’s warblers. The baby cowbirds out-compete the smaller warblers for the attention of the unwitting adult warblers, leading to the death of the warbler chicks.

By 1974, the warblers had declined to just 167 pairs, a low point that was reached again in 1987. Scientists estimate the birds’ numbers by listening for the distinct chirping call of singing males.

After that, state and federal wildlife officials, with the cooperation of nonprofit groups and volunteers, began a concerted effort to preserve stands of young jack pines and to capture and kill cowbirds, which have greatly expanded their range due to human activities.

Today, the warblers’ numbers have risen to more than 2,300 pairs—more than double the initial recovery goal of 1,000 pairs.

“Kirtland’s warblers were once on the brink of extinction and one of America’s rarest birds, but today they represent the power of partnership to recover imperiled wildlife,” said Tom Melius, Midwest Regional Director for the U.S. Fish and Wildlife Service. “Without a doubt, this bird’s recovery is the result of cooperation among states, local residents, federal agencies and conservation groups.”

Agency officials emphasized that the warblers will need continued monitoring and assistance in the years to come. A conservation plan was established for the birds in 2015, which calls for preserving young jack pine stands and controlling cowbirds.

Most Kirtland’s warblers nest in Michigan’s Lower Peninsula, although they have expanded their range to the Upper Peninsula and parts of Wisconsin and Ontario. They spend their winters in the Bahamas.

The U.S. Fish and Wildlife Service is accepting comments on the delisting proposal until July 11. A final decision is not due until April 2019.