Opponents of a $3.5 billion natural gas pipeline have taken to the trees in an effort to stop the controversial project, which would transect the Appalachian Mountains.

Since late February, protesters have stationed themselves in trees in the Jefferson National Forest in southwest Virginia in an effort to halt construction of the pipeline, which would transport pressurized natural gas more than 300 miles from West Virginia to southern Virginia. 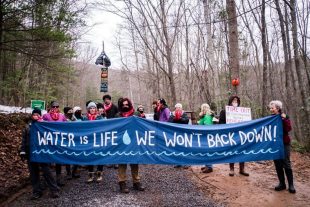 The Facebook cover image of the group Appalachians Against Pipelines. A “monopod,” occupied by a single protester, is visible in the background.

Officials with the Mountain Valley Pipeline company, which is a joint venture led by the gas company EQT Midstream Partners, have secured permission from the Federal Energy Regulatory Commission and other federal agencies to build the pipeline, which would cross a portion of the Jefferson National Forest and would also run directly beneath the Appalachian Trail.

One woman, who has not identified herself, has been sitting atop a “monopod” near the Virginia-West Virginia border for nearly two weeks, blocking access for pipeline workers. The contraption consists of a small platform atop a pole tethered to surrounding trees and covered with a tent.

In a posting earlier today on the Facebook page of the group Appalachians Against Pipelines, the woman said she is still receiving supplies from supporters despite Forest Service efforts to deny access to the site.

“Mountain Valley Pipeline has not been able to bring in the machinery to expand this road or continue to work on the easement they already clearcut,” she wrote. “The treesits on the other side of the mountain are also still going strong in their 44th day, and are blocking MVP from being able to clear their bore site to get the pipe under the Appalachian Trail.”

Pipeline opponents have made regular trips to the protest sites, and have documented interactions with pipeline workers and Forest Service employees in video clips.

Several local landowners who live near the proposed pipeline route have also stepped up criticisms of the project in recent weeks.

In her Facebook posting earlier today, the woman in the monopod gave no indication of how long she plans to stay.

“I still wake up every morning glad to be here,” she wrote. “I am extremely grateful for the steadfast friends who have kept the camp running near me despite being recently forced to move by the Forest Service, and continue to welcome the many supporters who make the trek up to visit.”

Mountain Valley Pipeline officials hope to complete the project by the end of 2019.