Bureau of Land Management officials secured bids yesterday for oil and gas leases on dozens of parcels in Utah, including land near the Bears Ears, Canyons of the Ancients and Hovenweep national monuments. 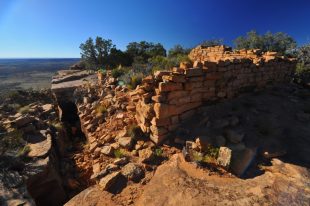 The BLM yesterday accepted bids to drill for oil and gas in areas of Utah rich in cultural resources. Photo © Neal Clark/SUWA

Oil and gas companies offered nearly $1.5 million for the leases, which include 43 parcels covering more than 51,000 acres in Utah’s red rock country.

Conservationists criticized the leases and vowed to fight drilling proposals in the region. They say such development would threaten rare species and degrade areas rich in cultural and archaeological treasures.

Several of the leased parcels are in an area containing signficant cultural resources called Alkali Ridge. In 2015, BLM officials decided not to offer leases there, saying they needed more information about those resources.