A rare salamander found only in rugged terrain along the Oregon-California border should be protected under the Endangered Species Act, conservationists contend. 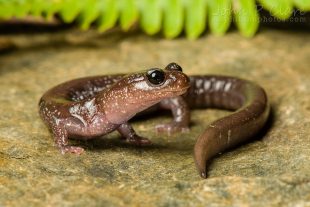 Long and brown with white speckles, the Siskiyou Mountains salamander lives in two populations, one in Oregon and one in California. The creatures depend on mossy slopes shaded by mature forests—forests threatened by Bureau of Land Management plans to increase logging in the region.

Four groups filed a petition on Monday to list the amphibians for protection under the ESA. They include Cascadia Wildlands, the Center for Biological Diversity, the Klamath-Siskiyou Wildlands Center and the Environmental Protection Information Center.

Conservationists first sought federal protection for the salamanders in 2004, a request that the U.S. Fish and Wildlife Service denied. In 2007, federal land managers implemented a plan to protect the animals in their stronghold in the upper Applegate River watershed in southwestern Oregon.

In their petition, the groups say that a 2016 Bureau of Land Management plan to increase logging in the area undermines protections afforded to salamanders under the 2007 plan and the Northwest Forest Plan.