A Forest Service manager with a background in wildfire management was tapped yesterday to lead the agency after the resignation of Chief Tony Tooke earlier this week.

Vicki Christiansen has worked with the Forest Service since 2010, most recently as Deputy Chief for State and Private Forestry. Previously, she served as the state forester for Arizona and Washington. 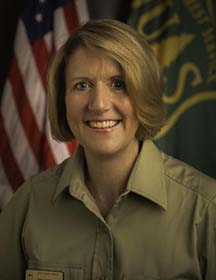 Christiansen’s appointment follows a tumultuous week for the Forest Service. Last Thursday, PBS News Hour aired a report detailing sexual harassment in the agency, especially among firefighting crews. The next day, the network reported that Tooke was under investigation for allegations of sexual misconduct.

In his email, Perdue outlined the administration’s priorities for the Forest Service. Those include expanded use of “Good Neighbor Authority,” a program that allows state and local agencies to conduct logging and thinning projects on national forest lands in coordination with the Forest Service.

“With seven years at the Forest Service and 30 with the states of Arizona and Washington, Vicki knows what is needed to restore our forests and put them back to work for the taxpayers,” Perdue wrote. “As a former wildland firefighter and fire manager, she knows first-hand that failure to properly maintain forests leads to longer and more severe fire seasons.”

A brief biography posted on the Forest Service’s website says that Christiansen holds a bachelor’s degree in forest management from the University of Washington. The biography notes that she has “special expertise as a fire line-blasting advisor” and is married to a retired fire chief.