A Forest Service proposal released today calls for rerouting a trail in Montana that crosses private land. That trail and others in the Crazy Mountains have been the focus of long-simmering disputes between the agency and local landowners.

The plan calls for building eight miles of new trail to replace the Porcupine Lowline Trail, which provides access to a pair of Forest Service recreational cabins.

Most of the existing trail crosses private land. Although there is no recorded easement for the trail, the Forest Service maintains that it holds a “prescriptive easement” for the route, as it has been in continuous use for decades. 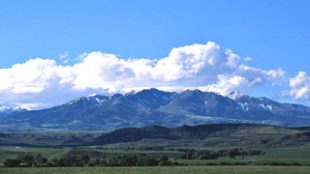 The new route would start at the existing trailhead and end at the same location as the old route. It would cost between $140,000 and $180,000 to build, according to Forest Service estimates.

The majority of the new trail would pass through national forest land. The Forest Service would obtain written easements to allow public access for the stretches that cross private land and would surrender its claim to the existing route upon completion.

“This proposal creates an opportunity for a positive solution that respects landowner interests while providing a high quality trail opportunity and access to National Forest System lands,” Mary Erickson, supervisor of the Custer Gallatin National Forest, said in a prepared statement. “Through conversations and negotiations with landowners, access advocates, and recreationists this alternative route has been identified.”

The Crazy Mountains, a popular hiking and hunting destination, are surrounded by private land. A number of trails, documented for decades on official Forest Service maps, cross private parcels to access the high country. Several area landowners claim that people who use those trails are trespassing.

In 2016, Sienkiewicz wrote a memo to his employees emphasizing the long-standing agency position that the public maintains a legal right to use designated Forest Service trails that cross private lands, as do agency employees. Agency officials say prescriptive easements can be nullified if a landowner can show that a trail user asked permission to use a route that crosses private land.

Last May, a group of landowners wrote a letter to Montana Sen. Steve Daines and Secretary of Agriculture Sonny Perdue complaining about the memo. A month later, Texas Rep. Pete Sessions complained to Perdue and Interior Secretary Ryan Zinke that the Forest Service was violating the property rights of one of his constituents, who owns a ranch near the Crazy Mountains.

Shortly thereafter, agency managers assigned Sienkiewicz to a desk job and launched an internal investigation. He was returned to his district ranger post last fall.

The Custer Gallatin National Forest is accepting written comments about the trail reroute proposal through March 31.