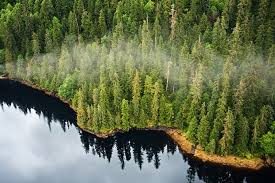 At 17 million acres, the Tongass is America’s largest national forest. Its 19 wilderness areas and two national monuments draw a million cruise-ship visitors annually, employing more than 7,400 recreation industry workers, and provide habitat that supports another 4,300 fisheries jobs. Together, recreation and fisheries account for over 12,000 jobs, accounting for half of southeast Alaska’s private sector workforce.

With those kinds of numbers, you would think that Alaska’s congressional delegation would do everything it could to make tourism, recreation, and fishing strong. And you would be wrong.

In a case of rearview mirror leadership (sic), Alaska’s politicians are pushing legislation that threatens tourism and recreation jobs to prop up the Tongass’s 321 timber jobs. Talk about sacrificing the many to subsidize the few.

Republican Sen. Lisa Murkowski is using her powerful positions as member of the Appropriations Committee and chair of the Energy and Natural Resources Committee to open up the Tongass’s wild, old-growth forests to logging. These roadless lands are now protected by federal rules from logging—rules that Murkowski wants to reverse.

The even crazier thing is that almost all of the timber that is logged on the Tongass is exported to Asia as unprocessed logs. Murkowski wants to spend more taxpayer dollars logging primitive backcountry wilderness so that Chinese millworkers can have jobs. All while degrading fisheries habitat and the scenery on which Alaska’s growing tourism economy depends.

Only in Alaska, where rugged individualists live off government welfare (Alaska is second only to Washington, D.C., in percent of its workforce employed by government) could this make any sense. The Tongass is a “national” forest, not a welfare office for a has-been timber industry that can’t make a marketable two-by-four without massive government subsidies.