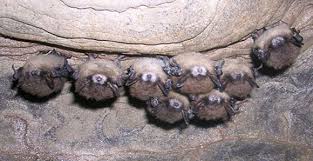 White-nose syndrome has killled millions of bats in the United States and Canada in the past decade.

An exotic fungus that is laying waste to bat populations in North America may share a fatal flaw with Dracula—it can’t stand light.

Researchers with the Forest Service and the University of New Hampshire found that ultraviolet light kills the pathogen that causes white-nose syndrome—a fatal affliction that has wiped out as many as 90 percent of bats in some locations in the United States.

The fungus Pseudogymnoascus destructans is native to Europe and Asia. Bats there, which evolved with the fungus, seem largely unaffected by its presence in caves and mines where they hibernate. In 2006, the fungus was detected in a cave outside of Albany, New York. It has spread rapidly, killing millions of bats in the eastern U.S. and Canada.

Two years ago, the fungus was detected in bats in Washington states. Last year, it jumped to Texas, the state with the greatest diversity of bats. So far, the fungus has been detected in 33 states and is estimated to have killed at least 7 million bats.

The fungus attacks bats in North America while they hibernate, causing them to burn critical reserves of fat. The disease gets its name from the fuzzy white fungal growth that grows on the muzzles and wings of infected bats.

In a paper released earlier this month, the researchers describe the fungus as a “classic example of an introduced pathogen decimating a naïve population.”

The researchers compared the pathogen’s genome with other fungi and found that it evolved in extremely dark and cold conditions. Along the way, the fungus apparently lost its ability to repair itself from damage caused by ultraviolet light—a condition that the researchers described as a potential “Achilles heel.”

“It is unusual that (the fungus) appears to be unable to repair damage caused by UV light,” said Jon Palmer, a research botanist with the Forest Service’s Northern Research Lab in Madison, Wis., and the study’s lead author. “We are very hopeful that the fungus’ extreme vulnerability to UV light can be exploited to manage the disease and save bats.”

The study found that just a few seconds of exposure to UV light was more than 99 percent effective in killing the fungus. With those results in hand, researchers plan to expose hibernating bats to ultraviolet light and compare their survival rates to bats that are not exposed to light.

Scientists have yet to determine how to exploit the fungus’s weakness. Options could include bathing caves in ultraviolet light, or illuminating the entrance to caves where bats hibernate.

Bat biologists warn that, if left unchecked, the fungus could lead to the extinction of some bat species in North America.

“This research has tremendous implications for bats and people,” said Tony Ferguson, director of the Northern Research Station. “Bats play a key role in the health of forests as well as the production of food in the United States.”