Looking to Solve a Problem? Ride a Mountain Bike in a Wilderness! 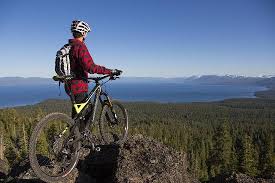 That particular argument was not made during a House subcommittee hearing yesterday to consider H.R. 1349, a bill that would amend the 1964 Wilderness Act to allow mountain bikes and other forms of nonmotorized mechanical transport into wilderness areas.

But over the course of a hearing that lasted only about an hour and twenty minutes, Ted Stroll, the president of a California group that advocates for allowing mountain bikes in wilderness areas, cited a long list of benefits for doing so.

California Rep. Tom McClintock, the bill’s sponsor and chair of the House Subcommittee on Federal Lands, and his Republican colleagues on the subcommittee, lobbed a season’s worth of softballs to Stroll, who is president of the San Jose-based Sustainable Trails Coalition.

According to Stroll, allowing mountain bikes in wilderness areas would …

“If we want to get young people away from their video screens and, you know, into the wild, we have to do it in a way that they want to do it. Adolescents and children just love riding mountain bikes on trails.”

“They’re less enamored of being taken out by their grandparents and forced to go on a hike for two hours. They find it kind of boring, in my experience.”

“Any people who oppose H.R. 1349 should ask themselves, ‘Why don’t I trust the local forest or parks supervisor to manage a wilderness area?’”

“People are basically confined to traveling by means that were available in biblical times. And that’s it.”

“The wilderness traditionalists are kind of, frankly, a dwindling cohort of older people like me in our sixties or above and are not going to provide us sufficient constituency thirty years from now to make wilderness even politically tenable.”

“I guess the alternatives are you put the elk on the back of some other suffering mammal and cart it out or you have to, I believe the term is, dress it right there in the field, I guess by putting up, like a wooden structure of some sort.”

“The problem is, because everybody thinks that wilderness is only open to hikers and horseback riders, if somebody goes in with an adaptive cycle, or even a wheelchair, nowadays, and they run into hikers who are militantly wilderness purists, they’re going to have an argument over why they’re there. And so the situation is going to be very uncomfortable.”

Toward the end of the hearing, Alan Lowenthal, a Democrat from California, referred to the wide range of opposition to the notion of amending the Wilderness Act to allow mountain bikes in wilderness areas.

“I definitely believe we’re getting a one-sided position today,” he observed, rather dryly.