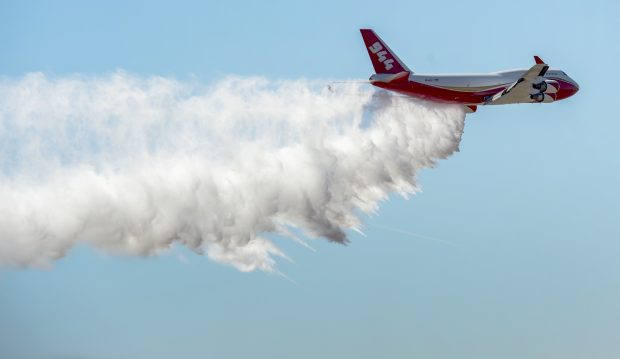 The owners of a 747 passenger jet retrofitted to drop retardant and water on wildfires have won an appeal claiming the Forest Service has no basis for limiting the size of firefighting aircraft.

In a decision issued last week, the U.S. Government Accountability Office sided with the Colorado-based Global Supertanker Services, finding the Forest Service had no justification for limiting the maximum tank size of airtankers to 5,000 gallons.

The plane, dubbed The Spirit of John Muir, can carry more than 19,000 gallons of retardant or water.

In May, the Forest Service issued a request for proposals for airtankers to fight wildfires. The document specified that the agency would only consider aircraft with tanks up to 5,000 gallons. Agency officials said that larger aircraft are not suited to launch initial attacks on wildfires.

In her 22-page decision, GAO General Counsel Susan A. Poling rejected the Forest Service’s arguments for establishing a 5,000-gallon limit on tank sizes.

Poling also noted that the proposal calls for establishing agreements on an “call when needed” basis, meaning the Forest Service has no obligation to use aircraft from a particular company. She recommended that the agency revise its proposal and reimburse Global Supertanker Services for legal fees incurred in mounting the protest.

This summer, during an active wildfire season, company officials embarked on a public campaign to garner a contract with the Forest Service.