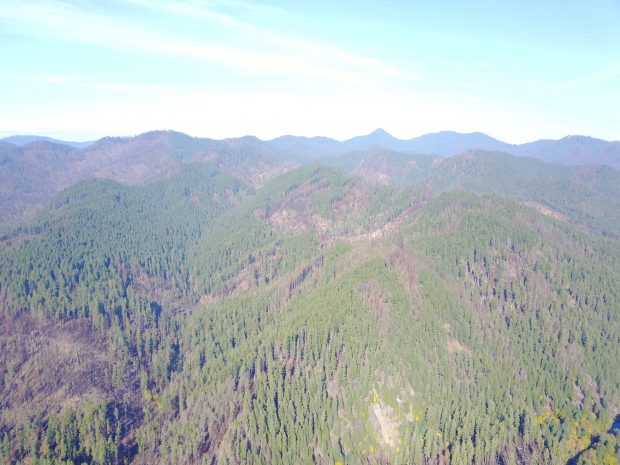 Fall Creek flows through the Cascade Mountain foothills in Oregon’s Willamette National Forest. It’s a lovely stream and a popular getaway for residents of nearby Eugene, where FSEEE is headquartered.

On August 10, lightning sparked a fire just north of Fall Creek. The blaze spread, burning slopes adjacent to the creek and eventually encompassing more than 10,000 acres.

Autumn rains doused the flames. But the area remains closed to the general public. After hearing rumors that logging was taking place within the closed area, FSEEE asked Willamette National Forest officials for permission to enter the area. The Forest Service denied that request.

So we decided to pursue a Plan B. We asked Forest Service officials if we could fly a drone over the closure area. An aviation officer with the agency said that would be fine.

FSEEE staffers, with help from a drone-owning volunteer, traveled to the south edge of the closure area last week. The drone footage is inconclusive on the question of whether recent logging has taken place. However, the video does show that the Jones Fire, as it was called, burned in a classic mosaic fashion, with pockets of high-intensity fire surrounded by stretches of green trees.

Now that the fire is out, the purpose of the closure is unclear.  We’ll revisit the area once it is reopened and see what the Jones Fire—and fire-fighting and post-fire activities—left behind.