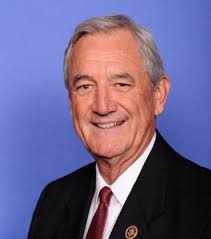 There’s certainly no shortage of bad bills being considered in Congress right now. This is a dangerous time for the environment, with anti-conservation forces ascendant in both chambers of Congress and in the White House.

We’re focusing right now on one particularly egregious bill, HR 2936, which would gut our bedrock environmental laws and lead to vast clear-cutting of old-growth forests.

The bill was authored by Arkansas Republican Bruce Westerman, who calls it the “Resilient Federal Forests Act of 2017.”

It would allow the Forest Service to sanction clear-cuts of up to 10,000 acres with little or no environmental review. In doing so, it would eviscerate the Endangered Species Act and the National Environmental Policy Act. And it would limit the ability of regular citizens to have a say in how their national forests are managed.

Westerman’s bill has already sailed through the House Committee on Natural Resources. Its supporters will likely try to attach it to some sprawling “must-pass” legislation in the weeks to come.

We’re working to inform key members of Congress about what’s at stake here. We need our allies to stand up to those who would hand over our shared public estate to private interests.

One such quid-pro-quo bargain seems to have been made between Westerman and Minnesota Rep. Rick Nolan, who should know better.

Nolan represents the northeast part of the state, which includes the Boundary Waters Canoe Area. He supports expanded mining operations in the area, which he says will bring good-paying jobs to his district.

The six-term Democrat is seeking support for HR 3115, which would allow an exchange of several thousand acres in the Superior National Forest for private lands. Nolan is pushing for the exchange on behalf of a Canadian firm that wants to dig an open-pit copper mine in the region.

FSEEE is taking no position on the land exchange itself. We’re not big fans of open-pit copper mines, mind you, but we recognize that the land that would go to the Forest Service has many environmental virtues. And we acknowledge that after undertaking an extensive environmental review, the Forest Service under the Obama administration gave its blessing to the exchange.

Here’s our beef with Nolan: He’s one of two Democrats and eight Republicans who are cosponsoring the Resilient Federal Forests Act.

Westerman, you see, sits on two House committees that are key in Nolan’s quest to bring more mining jobs to his district. In June, Nolan took Westerman and two other Republican representatives on a tour of mining sites in his district.

We’re working to call Nolan out on his Faustian bargain. This week, FSEEE took out a full-page ad in The Reader, a widely read weekly newspaper in Duluth, the largest city in Nolan’s district. It’s an open letter to to the congressman, spelling out the consequences of his support of Westerman’s bill.

These next few weeks are critical. We need our supporters in Congress to hold firm. We need them to oppose HR 2936—and all the other anti-environmental proposals being proffered by those who want to return to the “good old days” of anything-goes logging on our national forests.