Tidwell Out as Forest Service Chief 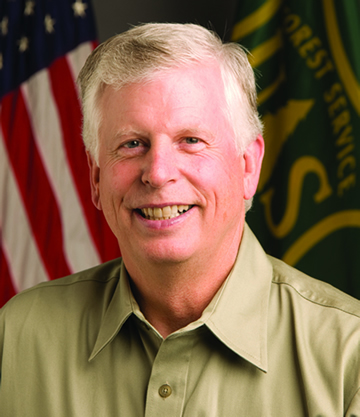 The Trump administration announced today that U.S. Forest Service Chief Tom Tidwell is retiring from the agency. His last day in office will be September 1.

“From the start, we have relied on Chief Tidwell’s experience and counsel, drawing on his years of experience both in the field and in Washington,” Secretary of Agriculture Sonny Perdue said. The Department of Agriculture is the parent agency of the Forest Service.

Tidwell has served as Forest Service chief since 2009. During his tenure, the agency’s spending on fighting wildfires mushroomed. More than half of the Forest Service’s budget now goes to firefighting.

The announcement made no mention of who will succeed Tidwell, or of a timeline for his replacement. The Trump administration has not yet nominated a person to fill the undersecretary position that oversees the Forest Service.

During his tenure, Tidwell and other Obama administration officials tried without success to persuade lawmakers to allocate more funds for firefighting, including accessing emergency funds to cover the costs of fighting the largest fires.

The news release announcing his departure stated that Tidwell “played an instrumental role early on in drawing attention and public support to confront the increasing severity and costs of wildfires and their residual impacts on the agency’s lands stewardship.”

Tidwell worked for the Forest Service for more than 40 years, starting as a firefighter and rising through the agency’s ranks.