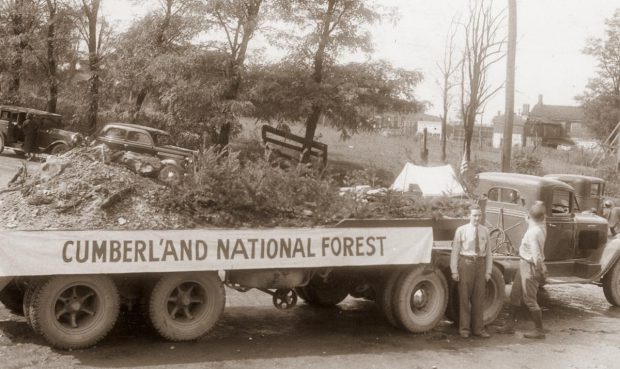 Americans once moved away from forests. Now forests are moving away from Americans.—The Washington Post

A new study of satellite images taken over 10 years starting in 1990 shows the rural forest canopy disappearing. Forest space disappeared from the United States in such big chunks that the average distance from any point in the nation to a forest increased by 14 percent, about a third of a mile.

Donald Trump becoming president has apparently quenched much of the fire in the belly for legislative Republicans to sue the federal government for control of public lands.

Idaho Gov. C.L. “Butch” Otter has asked to intervene in a lawsuit involving an environmental group and the U.S. Forest Service over a proposed logging project.

Will Pipelines Destroy Our Thru-Hikes?—Outside

A California federal judge on Thursday ruled the U.S. Forest Service didn’t take a hard enough look at the environmental effects a timber project in the state’s coastal mountain range would have on the northern spotted owl, saying the government arbitrarily and capriciously failed to consider more conservation-friendly options.

Two lumber companies filed a lawsuit Friday challenging the legality of President Barack Obama’s expansion of the Cascade-Siskiyou National Monument during his last days in office.

Siuslaw National Forest officials are working on plans to accommodate the large numbers of visitors anticipated to be coming to Oregon this summer to view the solar eclipse.

Return of the grizzly?—High Country News

Groups in the West are concerned that repealing a new BLM planning process could tie the hands of the U.S. Interior Department on future planning rules.

One in, two out; methane rules; facts and democracy—High Country News

Dryer than normal weather and fires on the Front Range are sparking some concern that the Western Slope could be in for an early fire season.

On Feb. 23, 1937, President Franklin D. Roosevelt signed a proclamation that established the Cumberland National Forest in southern and eastern Kentucky. The national forest was renamed as the Daniel Boone National Forest in 1966.

Some news websites create pop-up adds or surveys before allowing a user to view content. We have sourced the content using a free ad blocking extension that prevents these pop-ups when enabled. If you have trouble viewing the content of the linked sites, we suggest trying an ad block extension with your browser.