November 7, 2016 — When General George Armstrong Custer crossed the Black Hills in the summer of 1874, he noticed large swaths of dead forests. Contemporary ecologists believe mountain pine beetles did the damage.

For more than a century, foresters have marked the ebb and flow of the bugs in the Black Hills. Throughout that time, they have tried—and largely failed—to stymie the black beetles, which are about the size of a grain and rice.

A new Forest Service study emphasizes that there’s a good reason for that. Mountain pine beetles have lived in the forests of western North America for tens of millions of years. Their life cycle is remarkably complex and they interact with a host of other organisms, including mites, fungi, nematodes and bacteria. 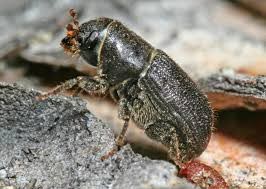 Throughout much of the twentieth century, forest managers tried to control the insects through “direct control” methods—cutting and burning infected trees or spraying them with powerful pesticides.

“For years … direct control of (mountain pine beetles) was advocated and for more than 75 years burning, peeling, spraying, and many more methods were used in an effort to kill these insects with little success,” the study says. “Of special note was the toxic insecticides used to such an extent that trees ‘glistened’ with chemicals that are now banned from use in the United States.”

Beetle outbreaks have occurred about every 20 years since 1900, according to the study, and last an average of 13 years. Beetles have killed more trees in the Black Hills over that span than have been claimed by logging, wildfire and all other causes combined.

The study, which was led by Russ Graham of the Forest Service’s Rocky Mountain Research Station, found that stands of ponderosa pine that are relatively open tend to be more resistant to major infestations.

But the findings also note that the largest mountain pine beetle outbreak ever recorded in the Black Hills occurred near the beginning of the twentieth century, during a period in which foresters believe that tree densities in the region were relatively low.

“These historical descriptions of the forests of the Black Hills and the anecdotal evidence of a major epidemic of (mountain pine beetles) occurring in these relatively low density and heterogeneous stands and landscapes underscores how little we really know about bark beetle dynamics,” the study says.

The study’s authors note that the quest to quell mountain pine beetle populations in the Black Hills was central to the early mission of the Forest Service.

“Even though direct control of (mountain pine beetle) was minimally effective,” the study says, “administrators driven by public opinion continued to spend millions of dollars trying to control these insects.”